Species: Goats, sheep, llamas, alpacas, camels, moose, and some exotic hoofstock. There is no age or breed predilection. However, disease is generally more severe in camelids and moose than other species.

What is it? Infection with deer worm is a parasitic disease that causes severe central nervous system inflammation. It usually occurs in the Fall and early Winter in the Southeast.

Cause: The parasitic nematode worm Paraelpahastrogylus tenuis, better know as the “deer worm.” It is carried by White Tailed Deer.

Diagnosis: Animals lose their ability to walk and stand normally. Often times, the animal is found laying in the field or barn unable to rise. Onset is sudden and animals usually act normally otherwise. The hind limbs are most commonly affected. A veterinarian will diagnose deer worm based on clinical signs, history, and response to treatment. The only definitive diagnosis in a live animal is submission of a sample of spinal fluid to an approved lab. An animal can also be submitted for necropsy if it had died or is euthanized. If you see an animal walking abnormally, lagging behind the herd, or one that cannot get up, call a veterinarian immediately. Only a veterinarian can differentiate between deer worm infection and other neurologic diseases.

Treatment: De-worming specifically for the deer worm is instituted. The animal is also placed on steroids/NSAIDS to reduce spinal inflammation. Proper supportive care is critical. Other therapies may be necessary as well depending on severity of the disease.

Prognosis: Good for those animals in which the disease is diagnosed early by a veterinarian. Prognosis is poor for those animals that have been down for several days, have stopped eating, or show signs of brain involvement.

Prevention: Yes! Monthly treatment aimed at killing deer worm can be instituted with the help of a veterinarian. Keep animals away from places where deer travel and remove standing water where snails live (snails carry infective larvae from deer).

You are deworming your horse wrong. 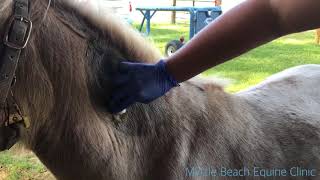 So Your Horse Has a Cough...

Toxic Plant of the Summer: Pokeweed!